How will iPads affect data collection in the lab?

Imagine working in a lab, recording experiment observations on a lightweight, portable notebook that captures all of your time/date information automatically, takes pictures, seamlessly incorporates equipment data files, and lets you look up references all in the same place. If you imagined a paper notebook, you’ll have realized that vision just isn’t possible. But if what came to mind was an iPad, you are among the growing number of research scientists who recognize how useful one of these tablets can be for your work. Many labs have already jumped ahead and begun implementing them, turning the discussion from if or when iPads will be used in the lab to how they will.

“When the first iPad was released in 2010, many dismissed it and the tablet craze it inspired as faddish. Fast forward two years and it’s clear they are here to stay.” Tom Brewster, Rolling out iPads in the Enterprise

A growing number of laboratories, hospitals, and universities are embracing the iPad as an information recording tool in the workplace. A survey conducted by Lab Manager Magazine found that the number of researchers who do now or plan to use mobile devices is already greater than those who don’t.

Some industries, such as medicine and pharmaceuticals, have been reporting up to 75% or more adoption. In fact, one university has even given graduating medical students iPads as gifts. While this kind of usage is ahead of traditional research labs, it shows that it can happen and sets examples for how implementation challenges are being addressed.

More and more, industry expert lists of pros and cons (or benefits and challenges) are being overcome, with the cons being crossed off and the pros becoming realities. Indeed, in the past year the conversation has moved from whether tablets will be used, to determining the logistics of how it’s going to happen.

Perhaps the real value that iPads bring to lab work is in the extraordinary things you can do with one. Beyond simply taking notes, native apps already exist or can be built to supplement or replace many lab activities.

And this is just a sample of the apps available, and as iPad use becomes yet more commonplace, it’s exciting to think of what will come.

Intrigued? Download the latest version of iCERF from the iTunes store

Naturally, hardware protection is a primary concern, not just from spills in general but also for those used in biohazardous, clinical, or other settings where sterility is imperative. Many researchers report simply using Ziploc-style plastic bags, which they can wipe down before and after use. Here are a few other options.

The Chef Sleeve disposable iPad cover was originally made for kitchens, but is indicated for use in hospitals and clinics.

This TrendyDigital Waterproof Case protects from spills and can be wiped down.
This iPad Defender Series case is built for durability and drop protection.

Mounts solve that awkward issue of “I have to do something else with both hands now, where can I put my notebook where it won’t get in the way?” while still letting you refer to it as needed. Griffin Cabinet mount – under-cabinet mounts would be perfect for labs where bench tops are usually covered with work materials.

FridgePad Magnetic mount – sold as a fridge mount, but there is usually no lack of metal surfaces in labs: cabinets, flow hoods, fridges and freezers abound. This magnetic mount can be moved around from place to place with you. 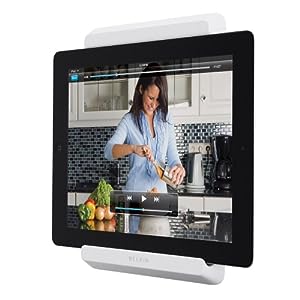 Belkin 3M wall mount – for a slightly more permanent attachment, this Belkin mount uses 3M adhesive strips which can be adhered to any surface, not just magnetic ones.

An important usability consideration is the lack of a traditional keyboard for typing. While some users say that they are getting faster at typing directly onto the screen, some still prefer using actual keyboards. Luckily, accessory producers are already meeting that need.

The TouchFire iPad Keyboard is a silicone overlay that is placed right on the screen’s surface. It provides the 3D responsiveness that people are used to, without needing an extra piece of hardware.

What are your thoughts on iPads in the lab? Let us know on Twitter!